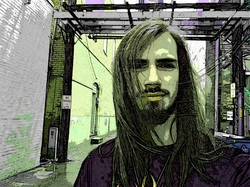 I was born August 9th in the year 1993. I knew early on that I was destined to someone special. I was always drawing; always being creative. When I started high school, my art career began. I started taking every art class I could, eventually even taking two art classes during my senior year. The internet had played a large role of my early career days, as I was filling out three to four commission orders a month. Around mid-2010, I launched my first website. Everything sailed smoothly until mid-2012, shortly after graduating high school, when I was forced to call it quits for reasons that are best left unexplained. For a few months, I was unsure when I could be an artist again, if at all due to my deepening depression, until I met up with a childhood friend, strengthening our friendship and pulling me out of depression for a good while. I launched Taylor Productions, which we ran for about a year, until it was decided that a new route needed to be taken. Deciding to focus on music and personal art, I launched this website in 2013, along with a new band, and have since been involved in numerous art mediums. Be it art or music, I strive to do it all. Starting in mid-2014, I began commissioning once again, even reaching out into the realm of prop-making.

In 2010, I started my first band, the name of which will not be mentioned. We had aimed at being a rock band, but there ended up being too many metal elements, so we declared ourselves a metal band. From the time we started, to the band's death in 2013, 3 official demos CDs were released, with a fourth and final demo album, "Finale", released mid 2013 to commemorate the band. "Finale" for the next year was available on online retailers, but has since disappeared.

After disbanding the previous band in 2013, I immediately recorded a four-track EP entitled "Thrash and Burn". Under the name "Wolf In Vain", I started a new thrash metal band. Taking inspiration from the Bay Area Thrash Scene bands in the 80s, my music career showed promise almost instantly. While the line-up has been changed several times, since, Wolf In Vain became one of my greatest achievements. While the group was disbanded in 2017, our debut album had been recorded and will eventually be released.

The Greatest Background Ever!!!
I will be continuing to create art for the rest of my life. Within the next few years, I plan to being sculpting again, as well as releasing multiple art series, the first of which is entitled "The Journey". Aside from art, thrash metal has become a major aspect in my life. I plan to continue Wolf In Vain until I can no longer make music. A side project, titled "Deum", will be releasing albums on a rare occasion, but they'll be coming along. I will also be writing books once more, focusing on horror, adventure, and a few more genres.

Note: A very large project is in pre-production. This will span across art, writing, and music. While details cannot be given out yet, I promise to it will be a great release.