THE ART OF TAYLOR W. WILSON 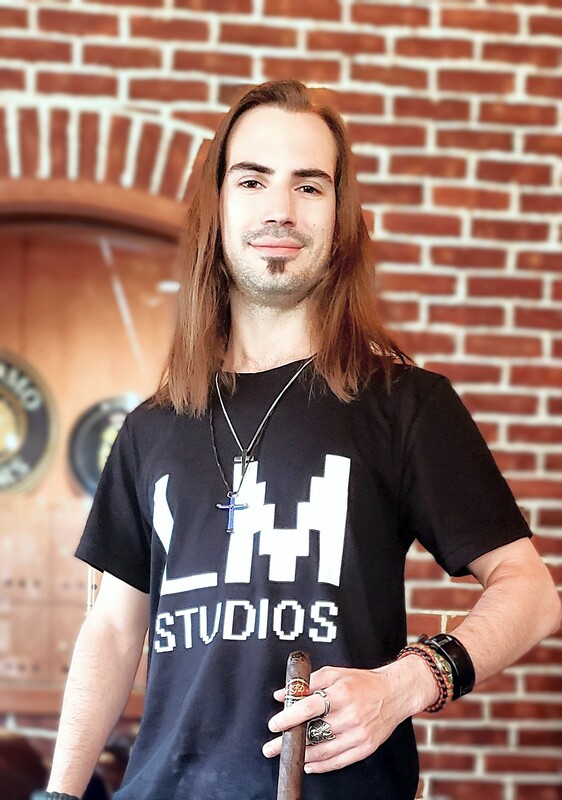 When he's not working on LMStudios, Taylor can be found doing a variety of genres of artwork in what he tries to call his "spare time." Be it digital or physical art, music, or his next novel, Taylor never rests when it comes to the world of creativity.

Starting out fresh out of high school, Taylor set up his first studio in early 2013. Very little content had been produced, but included the original Table Manners run (9 comic strips total), several podcasts, and an EP from his thrash metal band Wolf In Vain. Things eventually fell through as Taylor pursued the band life. The idea to reboot Table Manners arrived in 2016, but was short-lived. During this time, Taylor had played around with several comic making softwares, but none of them attracted his attention. It was in 2017 that Taylor started writing "Dark Matter: Code Red," and with the release of the novel, Team Dark Matter was formed. The studio's name was meant to be temporary, and temporary it was. Table Manners finally received it's reboot, bringing Taylor back to his comedy roots.

In 2019, "Laughing Matter Studios" (LMStudios, LMS) finally received it's proper name. The studio thrived off of Taylor's original studio's plan to produce comedic content, though genres could vary, such as the case for Dark Matter and the 2020 co-op motion comic, Project Axis. The first two years saw content release, but it wasn't until 2020 when Taylor led the studio forward by throwing several projects into production. Taylor produced the short videogame "That's My Book!!!" early in the year, originally to simply see if he could do it. After completing the game, Taylor went back to it's beginning and redid the artwork and made the game overall a better play. Finishing the release of the game, Taylor went on to animate Project Axis Episode 1 for Phoenix Press. Finishing out the year, Taylor finished writing Dark Matter III, the final book in his trilogy.

2021 was a different year for the artist extraordinaire. Next to no art pieces were released in his gallery. All resources had been loaned to LMStudios and the number one franchise for Taylor was Table Manners. The comic strip series received it's usual three-panel strip each month of the year, but what really excited the artist was the release of the very first Table Manners videogame. Featuring a similar style to LMStudios' previous game, Table Manners: WormCation was everything it needed to be: a comedic open-world adventure set in a city based off McKinney, Texas, just like it's comic counterpart. Dark Matter III unfortunately did not release during 2021, though, as Taylor had set a high bar for the novel's coverart. Rather than use a simple planet shot or character concept art (reference to the original covers of the first two novels), Taylor opted for a CGI cover. This meant he would finally need to begin crafting the CGI Dark Matter universe. After hiring on a 2D artist and a 3D artist, Taylor quickly put together several foundations of characters. When the characters that Taylor needed were completed, he learned CGI for himself in order to begin crafting ships, planets, cities, stars, and more.

The next year was a change in the Artist Extraordinaire's career. Taylor's goal was to do an art piece every week; digital, collage, acrylic, etc. He also began live-streaming as way to connect with people around the world and regularly displayed art work at the end of his streams. In January of 2022, Dark Matter III's cover was announced as nearly complete with only a few minor details needing to be added. During the second week in February, the novel was completed. Almost immediately, Dark Matter III went up for pre-order on Amazon ad the novel released March 9th. With the completion of the first trilogy, Taylor announced that he would revisit the Dark Matters short story saga, stating that he intended to write out several more short stories and updating the original short stories.

September of 2022, Taylor pushed LMSudios further than ever before by finally releasing the first episode of Table Manners: Appetizers, an ongoing miniseries based on the comic of the same name. The series was meant to release strictly in a 9:16 format, allowing the studio to release the series on YouTube Shorts, Instagram Reels, and TikTok. This also marked the drafting of the new Laughing Matter Studios website.

If Taylor's mind is not completely preoccupied with work, he can be found found enjoying a cigar while working, a hobby that he has grown more attuned to in recent years, even talking about learning to roll cigars one day. Taylor also spends much of his time working on artwork outside of LMStudios.